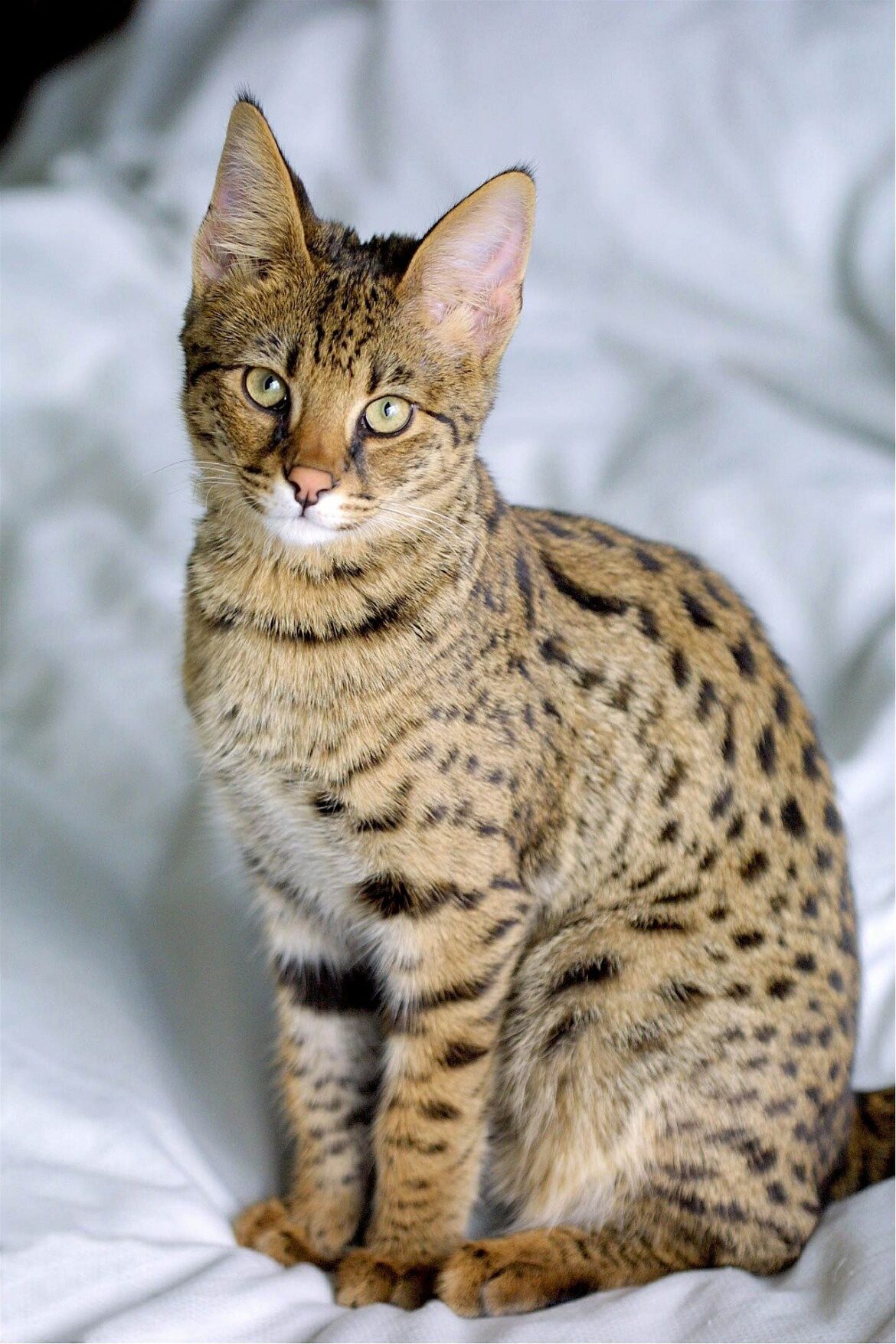 Savannah Cats are unique cats that are quite popular in many parts of the world. Just because they are popular doesn’t mean that you shouldn’t be conducting your research into the Savannah Cat and making sure that it is the right choice for you. And for your family.

Let’s take a look at all of the things that you need to know about the Savannah Cat.

How The Savannah Cat Came To Be

Many want to know how you get a Savannah Cat. It isn’t just a breed that appeared on its own. The Savannah Cat is a cross between two different cats, a domestic cat, and a serval cat.

The only set cat species that needs to be part of the breed is the African Serval, a wild cat that is quite beautiful, smart, and strong.

The other half of the breed can be any number of cats, but one of the most common/traditions to mix the Serval with is the Egyptian Maus. Others include; Oriental Shorthairs, Savannahs, and Ocicats.

It wasn’t until recently that the Savannah Cat became recognized by The International Cat Association (TICA).

The first reported Savannah Cat was bred in 1986 and is considered the beginning of the breed. Although these cats have been bred for quite a while, they weren’t recognized until 2012.

Notable Features of the Savannah Cat

One of the most notable features of the Savannah Cat is the large ears with a distinct point to them. They are great listeners, and this trait comes from the Serval that is bred into them.

The coat of the Savannah Cat is also notable; it is either golden, silver, or black and is spotted. The spots sometimes look like stripes. This also comes from the Serval, but the color is partially determined by the breed that they are mixed with.

Personality of the Savannah Cat

Savannah Cats definitely have their own personality; they are not far from being wild. Even if the Serval that it was bred from had been in captivity for a while, they often still have the instincts of a wild cat.

This may make them not the cat for everyone. After saying that, though they are great partners and their personalities are cherished by many.

One of the first things that you need to know about them is that Savannah Cats are very intelligent. They bring a lot to the table when it comes to smarts.

Because they are smart, they will often be quite curious when they encounter new things and new people. This may take some getting used to.

Along with smarts, part of their nature is being very active. They like to run around and explore. If your Savannah Cat doesn’t get enough attention and/or stimulation from you during the day, you might just find them asking for it.

This, combined with smarts, can lead to some very unique ways of asking for attention. Savannah Cats have been known to manipulate alarms in order to get your attention.

It may seem at times like Savannah Cats have a sense of humor; they enjoy a good joke. They may like to push things at you, hide from you, or play with whatever you have in your hands. This can be enjoyable at times but also quite frustrating.

One more thing that you should know is that Savannah Cats often like to cuddle with their human companions. They might even get under the covers during a cold night. Or you could find them being unique and being perched on your head while you two sleep.

Any cat that you get has the potential to have health problems. This includes diseases that they might inherit, such as allergies. Savannah Cats are known to be relatively healthy overall, especially due to their active lifestyle and their intelligence.

One of the biggest concerns for Savannah Cats, or any other cat for that matter, is obesity. It is easy for your cat to start eating too much.

Control how much you feed them and know what their optimal weight should be. Savannahs shouldn’t have too many problems with obesity, especially if they have room in your home to move.

Other health concerns that you might have to worry about are the same ones that you would have with other cats, such as infection or allergies. Rabies is also a potential problem. Most of these types of health concerns are preventable through vaccination and proper care.

Something that you will want to keep an eye out for is a breeder that offers health guarantees on the Savannah Cats that they breed.

If you are getting a cat from a breeder, ensure that they offer such a guarantee. If they don’t offer one, there might be a concern over known health problems.

Savannah Cats are often still at least part wild, even if the Serval was well tamed. That means they might need a specific diet. It might take time to identify whether your Savannah will need a specific diet or not. Other times they will let you know right away.

Most Savannah Cats will do best with a diet of raw food, similar to that which they would eat in the wild. This is most common with Savannah Cats that are closer to wild cats.

The further down you get through their breeding, the more likely they will be to want to eat common cat food. However, those who do better with raw food will find that their cats get stomach aches when they eat premixed food.

Also, keep in mind that if you have to feed your Savannah Cat raw food, you will also need to ensure that they get at least some vegetation.

You should talk with your vet to see if they have vegetation that they recommend. Depending on where you live, it may be hard to get certain vegetation.

You will find that Savannah’s coat is quite soft and can easily be described as luxurious. Due to the short coat, it tends to be quite easy to take care of. One of the things that you should get into the habit of is to give weekly brushings.

These brushings will help to get excess fur and dust bunnies off your best friend. Weekly brushes will also help to ensure that you find less fur around the house.

A good amount of cats, including Savannahs, learn to like their brushes. It is a time for them to relax. They also feel better once the excess coat is removed.

Just like any other cat, you will want to trim their nails regularly. Every cat is different, but most people will find that a weekly trimming before or after the brushing will help to keep the nails under control and prevent them from getting too long.

If your Savannah’s ears look like they are dirty, you can wipe them out. The best option is to use a sterile cotton ball that has been dampened with an ear cleaner recommended by your vet.

If you do not have an ear cleanser yet, you can use clean water, but it is best to use a cleanser to prevent causing an ear infection.

Dental cleanings during routine vet visits are a good idea to help ensure that your kitty has fresh teeth. Not to mention good-smelling breath.

Pros and Cons of Owning A Savannah Cat

Like with any breed of cat, there can be both pros and cons of owning them. Savannah Cats are a relatively new species, and that leads people to having more questions about them.

Their relatively wild nature can also bring up questions. Here are some of the pros and cons of owning a Savannah Cat:

Getting A Savannah Cat

One of the easiest ways to get a Savannah Cat is to buy one from a breeder. This is partly because they are a newer breed, and you might have trouble finding one at a shelter that you know for sure is a Savannah Cat. Breeders exist around the world for this species, so it isn’t hard to access them.

Before settling on a breeder, make sure to spend some time researching the breeder. You will want to know just about anything you can about them. For example, knowing their guarantees, the mixture of breeds (as only half of the cat is Serval), and anything else that you have.

Make sure that you ask any questions that you might have. Any legitimate breeder should be happy to answer questions for you.

The cost of getting a Savannah Cat from a breeder can be quite expensive. A lot of factors come into play. The lowest price that you can generally find a purebred Savannah Cat for is around $1,000. However, that is for a Savannah Cat with some of the least breeding.

One of the other factors affecting the cost of a Savannah Cat is the size of the litter. The larger the litter, the less the cost will be. A breeder will often offer base prices on their website.

If they are expecting a litter and they know the two cats well, they might be able to give you very accurate costs. It takes looking around in your area to find the price.

Ethically the best choice is to always go with a shelter for getting any cat that you are interested in. Before even turning to a breeder, we highly recommend that you look at shelters near you.

This helps to ensure that kitties don’t stay in the shelter for longer than needed. It also helps to ease the burden on shelters. Many of them are underfunded and filled past their normal capacity.

When getting a Savannah Cat from a shelter, it is typically rather affordable. The cost depends on your area and the shelter that you are looking at, but the cost could be between $100 and $250. This fee isn’t to buy the cat but to support the shelter so they can take in the next cat and help them.

Getting a Savannah Cat can be a big step. They are often closer to adding a child to your home than most other pets. Especially if you get the Savannah as a kitten. Take a look at all we have talked about here and use it to help decide whether a Savannah Cat is right for you or not.

Did you end up picking a Savannah Cat as your next pet? Let us know in the comments section down below. If not, let us know what cat you did pick. This might help the next person determine whether the Savannah is right for them.

Teacup Cats: Everything You Need To Know