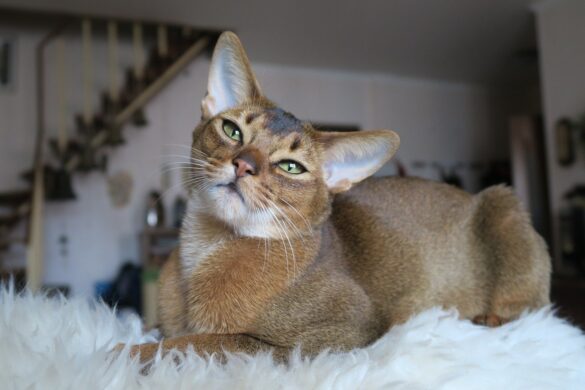 Abyssinians are medium size beautiful cats having muscular and stout bodies with long and slender legs. They have round, wedge-shaped heads with characteristic small tufts on the ears’ tip. They also have large almond-shaped eyes. The most recognizable color of Abyssinian is ‘ruddy,’ but there are many more. They are usually known by their short name, i.e., “Aby.”

Abyssinian is a medium-sized cat with an elongated body and well-developed muscles. She is an active cat who loves to jump and play.

The Abyssinian is a medium breed in every aspect with smooth planes on her forehead. She has a slight dip in her triangular head. Instead, her big ears are bent over her head, which gives her a furious and alert look about her as if she is always paying attention to everything going on around her. Her eyes, which look enormous on her face, show the ambiguity and intelligence within the breed.

The Abyssinian has a short coat and a little hair in her ears. The Abyssinian color is unique and special. The majority of the fur has a color band on each hair, making the skin darker along the spine. The color on her body softens and becomes lighter under the neck and between the legs.

Although the Abyssinian cat is thought to be a particular breed that can carry its roots directly to the Nile Valley, it was developed and bred in Britain. In the 1860s, Lord Robert Napier brought a cat to Britain after a military campaign in Abyssinia. The cat was named Zulu and was the basis of the beautiful breed today called the Abyssinian.

The Abyssinian coat’s unique and memorable ticking pattern reminds people of the camouflage coat pattern present on a wild rabbit’s skin. This feature was so pleasing that Zulu was raised with randomly bred cats that looked similar to their coats, and an Abyssinian breed was developed with time and patience.

The breed became very popular, and soon Abyssinian cats were found throughout Europe, the United States, and Canada. This popularity showed the species’ salvation as two world wars almost wiped out all cat breeds in Europe.

New Abyssinians were imported, and the breed continued. In the late 1960s, when the Flynn leukemia virus again wiped out these breeds in Britain, more Abyssinians were brought to Britain to reestablish the species.

The Abyssinian is a lovely and active cat that is easy to deal with in your home. They love people and other animals. They will play with their toys for hours and enjoy a reasonable period of time cooperating with their parents. They will interact with you in a soft, calm voice.

Abyssinians are loving and caring cats and love to spend time with their pet parents. Although the Abyssinian coat is easy to care for, the Abyssinian likes to be combed or rubbed with silk or chamois cloth. She will reward you with a loving purr.

Abyssinians are active cats and will usually control their weight with adequate exercise. They should have access to high places and cat trees so that they can climb, jump and play in their free time. Both indoor and outdoor cat trees work for them.

Abyssinians are communal cats and like to have some company in family, pet parents, or other pet companions. These cats must be provided with another cat or pet when you leave them alone for a day or two.

The Abyssinian short, thin coat is easily cared for with weekly combing to remove any dead hair, open any tangles present in the hair and distribute oil on the skin. When the cat is flowing, bathing will help to remove as much hair as possible quickly.

Brush their teeth to avoid periodontal disease. Daily dental cleaning is best, but weekly brushing is better than nothing. Trim nails every two weeks, wipe the eyes’ edges with a soft, damp cloth to remove any discharge or unusual substance.

Use a separate cloth for ​​ each eye, so you do not pose any risk of spreading any infection. Check your cat’s ears weekly. If they look dirty, clean them with a cotton ball or a soft damp cloth soaked in 50-50 warm mixer water and cider vinegar. Avoid using cotton swabs, which can damage the inner side of the ear.

Keep the litter box clean and spotless. Cats give significant attention to bathroom hygiene, and a dirty litter box can spread diseases and cause the cat to start using other places of the house as a bathroom.

It is an excellent hint to keep an Abyssinian cat only as an indoor cat so that she is not exposed to other cat-borne diseases, dog or coyote attacks, and other hazards to cats such as hit by a car. Abyssinians who go out are also at risk of being stolen by someone who wants to get such a beautiful cat without paying the price.

Due to their hyperactivity and moderately unstable health, they have unique nutritional needs. Some Abyssinians may need extra food in their regular cat food diet.

This cat breed requires a special diet consisting of high-quality dry cat food. It also needs fresh water to avoid dehydration and other related health problems. Abyssinians of all ages need a balanced diet and proper nutrition. Protein and vitamins are essential for keeping these cats vitally healthy and developing.

Cats are carnivores, meaning they have nutritional needs that can only be met with a diet based on animal tissues. The macronutrient profile for cats is high in protein and fat, consistent with a meat-based diet.

Try to make the best healthy choices for your cat’s food. Experts and vets say there are three things to avoid. These are chemical, meat by-products, preservatives, and carbohydrate fillers.

Both purebred cats and mixed-breed cats have a variety of health problems that can be inherited or acquired. The most common issues affecting Abyssinian include the following:

Cats are always prone to dental diseases, leading to pain, inflammation, off-feeding, stress, anorexia, and weakness. Always brush your cat’s teeth regularly and take them to the vet if something serious happens. Abyssinians are also prone to these dental issues like every other cat.

Patellar luxury is an inherited dislocation of the knee that can range from mild to severe. Serious issues can be treated with surgery.

Progressive retina atrophy is a degenerative eye disease that affects Abyssinian badly. If you see any symptoms of this disease in your cat, visit your veterinarian as soon as possible.

Renal amyloidosis is a hereditary disease that occurs when a type of protein called amyloid accumulates in the body’s organs, mainly in the Abyssinian’s kidneys. It can eventually lead to kidney failure. There is no cure for this disease, but proactive measures can be taken to diagnose, prevent, and treat renal amyloidosis in cats to slow its progression.

Pros and cons of Abyssinian

What is The Price of Abyssinians?

Intelligent, royal, and ancient, Abyssinians do not come cheap. You shouldn’t be surprised that Abyssinian cats and kittens cost a little fortune, especially if they come with a pedigree.

Cat breeders ask for two to three thousand USD for them. Of course, that doesn’t mean all Abyssinian cats are expensive. You can get some mixed kittens for around kit 600-700 USD.

The following points should be kept in mind when analyzing the price or when buying an Abyssinian kitty:

Where To Adopt or Buy Abyssinian Cats

You can adopt Abyssinian cats from the following places;

Teacup Cats: Everything You Need To Know