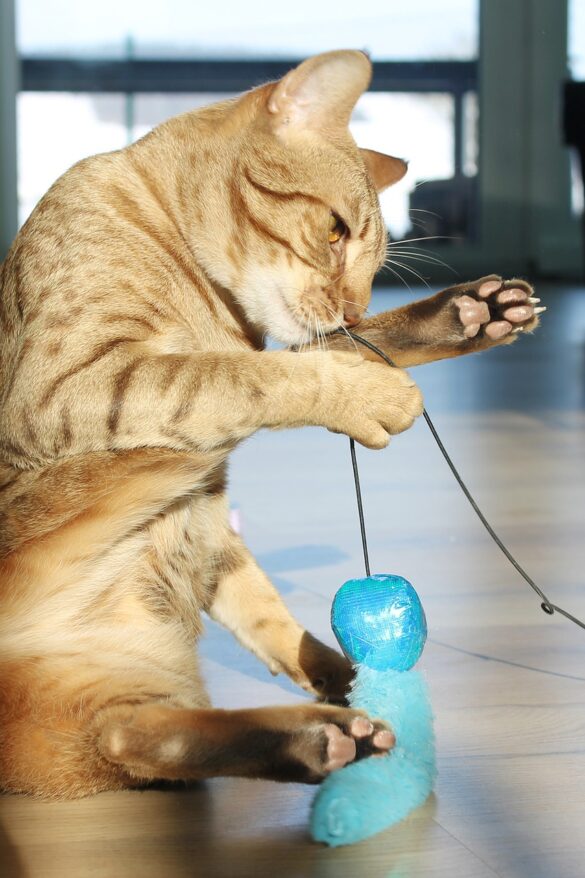 Ocicat looks wild but has a domestic origin. This breed originates as a result of excessive breeding from Siamese, Abyssinian, and American shorthair breeds. Despite their wild appearance, Ocicats are thoroughly trained, friendly, social, and playful.

Ocicat was created to do the same job as its name implies, i.e., resembling an Ocelot! Similar to breeds like the Bombay or Toyger, the Ocicat was bred to mimic a large wild cat’s shape but without a wild DNA in the cat’s make-up.

With its noticeably stained coat, Ocicat is unique and one of a kind. This spotted pattern emerges due to excessive cross-breeding between different cat breeds. These cats have charming personalities, profound minds, and temperaments that have been described as “Dog-like.”

However, the second cross/litter of this particular hybrid produced the kitten with unique spots. Because the kitten resembles a wild ocelot, Daly’s daughter called it “Ocicat.” Hence, its name termed permanently as an Ocicat

Fun Fact: The Ocicat was created by mistake amid a dare.

The first Ocicat cat, named Tonga, was spayed and given as a pet. But when the Abyssinians began to breed and produce tainted/spotted kittens, Daly began to back cross them with Siamese parents and began to make a complete spotted cat. Soon, other breeders began to do the same, and the Occitan breed officially began. The CFA recognized the species for the championship in 1987.

Ocicat seems to walk on the wild side, but they are loving, adaptable, curious, and playful and have a great devotion to their human companions. Extremely intelligent, dynamic, and friendly, Ocicat learns to respond quickly to their names and learns various tactics, including coming to the owner and playing games like hiding and seek. Begging for food is another trick that Ocicat master with minimal effort.

Ocicat personality is dynamic, loving, and very social, and adaptable. Ocicats only have a relationship with one person and prefer that person’s company to others, even though they have friendships and love with other people in the house. They behave well with other animals and people and praises the animal’s company ifs he stays alone for a long time.

Like their Abyssinian ancestors, the Ocicat love to dance on top of your bookshelves for their leisure activities. They are dynamic cats and need adequate space, and plenty of toys, cat trees, and diversions keep them occupied. Like her semi-ancestors, the Occitan is very vocal and talkative but not aggressive.

They want to express to you about their day when you came home at night, but they will not bore you with every detail.

Also, there is a lack of rasp (Siamese rasp) in their voices, which some people find disturbing. However, since they are a vocal and talkative breed, they are highly tuned to the tone of your voice. Also, harsh verbal reprimands can hurt their sensitive feelings or break the trust bond with their favorite pet parents.

Ocicat is very social and humane with other pets and humans. While they generally accept all family members and strangers, these cats are more likely to form a strong bond with a particular person in their family and follow them.

Ocicat cats can be immediately trained to perform many tasks and tricks, such as walking on a leash and standing, sitting, and fetch. They are smart enough to understand the meaning and the context so that they will pick up your commands and desires relatively quickly.

Ocicats perform well in indoor homes and behave well with family dogs, especially if they are socialized when they are kittens. However, due to their highly sociable nature, Ocicat cats in a pet household can cause isolation problems if left alone for more than several hours at a time.

Ocicats are surprisingly favorable. They make excellent traveling companions for people in RVs and are happy in an urban or rural setting until their social needs are met. They enjoy climbing, so giving them some height options would be a nice touch.

Ocicats cats love all kinds of toys and are known to be very possessive about their belongings. If you’re trying to keep their places clean by keeping some toys away, then they may not like it.

This breed shed enough to keep it off the “hypoallergenic” list, but all you need to do is brush up weekly. Ocicat also praised the brushing and grooming by their pet parents, which adds shine to her coat and removes any tingles.

Ocicat does not need to be bathed unless you intend to show them at the exhibition, in which case, choose a shampoo that enhances the colors of their natural coat: chocolate, and cinnamon tone for spotted Ocicats, bronze-tone for brown, a whitening shampoo for silver pets and a pearl-tone for blue, lilac, and fawn kitties.

The Ocicats’ robust and athletic body needs a balanced and appropriate diet to maintain its health and energy. Grain-free foods are often preferred because they are raw food eaters. Don’t be afraid to give a variety of foods to your cat. This food variation also prevents the cat from becoming finicky and prevents malnutrition, usually by feeding only one brand. Do your research and talk to your pet doctor about your cat’s nutritional needs.

It is easy to maintain a short, shiny, and smooth coat of Ocicat. Brush your cat once a week to remove loose hair and facilitate the spread of skin oil. A rubber cat grooming brush will do the job and, at the same time, massage your cat. These cats are the perfect choice for those who do not want to deal with cat hair on their clothes.

Most Distinctive Feature of Ocicat

The most distinctive feature of the Ocicat is its shiny spotted coat. The coat comes in 12 different colors with a dark thumbprint-shaped spot on the light background coat. Ocicat has an agouti coat, which means that each hair has a dark and light-colored band. This feature gives these cats a shiny glow.

Rows of spots run through the spine, and randomly placed dots move towards the shoulders and back end. The neck is adorned with scattered spots in the form of a broken necklace, and the broken bracelets adorn the legs. Ocicat comes in chocolate, lavender, cinnamon, blue, fawn, and silver colors.

Responsible breeders screen their cats for any health problems associated with the breed. Ocicats can suffer from some health problems, which include the following:

Liver or renal amyloidosis is a potentially inherited disease when an insoluble protein called amyloid accumulates in organs such as the kidney or liver. It results in sores, dysfunction, and eventually organ failure/damage.

Periodontal or gum disease is also common in Ocicats, so regular teeth cleaning is required. Make sure you have an established veterinarian on hand and schedule regular check-ups.

Pros and Cons of Ocicat

Where To Adopt or Buy Ocicats

You may be able to find a purebred Ocicat through a breeder in your area, but you would also adopt Ocicat from a rescue organization.

Cost of an Ocicat

Ocicat cats are divided into two distinct categories in terms of price to promote goals and quality.

The average Ocicat cat raised as a pet costs relatively low, about 250-350 USD per kitten. It is cheaper than other purebreds in the United States. Limited registered Ocicats cats are not allowed to breed. They are usually controlled by sterilization before being taken to their new homes, so they are more suitable for raising pets.

Fully registered Ocicats are allowed to breed, and their price depend upon their pedigree, appearance, and so on.

Ocicats with average family records, which come from lesser-known breeding farms, typically cost between $600 and $800.

Ocicats with a premium bloodline, which comes from well-known breeding farms and good looks, will cost between $900 and $1,500.

You can also read;