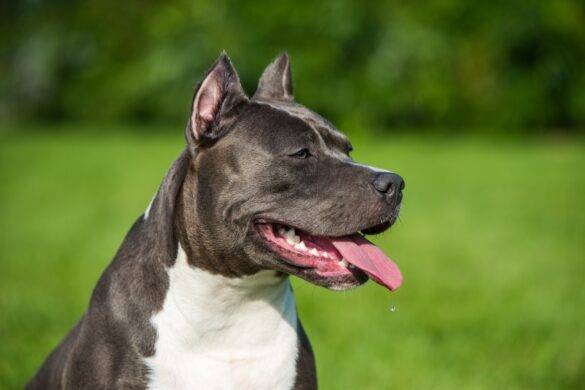 American Pit Bull Terriers are a breed of companion and family dog. Developed initially to “bait” bulls, the breed evolved into all-around farm dogs and was subsequently brought into the home as “nanny dogs” due to its gentle disposition towards children.

Pitbulls are a popular breed, especially in California’s Central Valley. They are frequently overbred, bred for protection, or produced for dogfighting. Through time, they’ve developed a negative image due to misunderstandings about their attitude, including inherently aggressive conduct, viciousness, and a dominant mentality.

True, nearly any dog breed may inherit specific characteristics; thus, it is more about raising pit bulls. As with German Shepherds and Golden Retrievers, Pit Bulls make excellent lap dogs, therapy dogs (Helen Keller had one), and even bomb-sniffing canines. They have the potential to be gentle, child-friendly, and readily trainable.

Pit Bull puppies are notoriously obstinate and demanding, yet they are brilliant and trainable. Their brains are sponges for tricks, but they require discipline and consistency. Additionally, they should be exposed to many other dogs early in life to socialize and prevent aggressiveness.

How Much Do Pitbull Puppies Cost?

The typical price of a Pitbull puppy from a reputable breeder is between $2,000 and $20,000. These are for exceptional Pitbulls puppies with a proven bloodline. Certain Pitbulls are available for as cheap as $1,000. However, they frequently lack the appropriate papers for dog shows.

An alternative is to purchase a Pitbull from a breeder. It is a viable option if you want to compete with the dog in agility and other contests. A breeder will have the necessary documentation, including pedigree information, for their dogs.

Pitbull prices are expected to begin at $800. Avoid choosing a breeder who costs less since the dog may have come from a puppy mill, where puppies are kept in deplorable circumstances by unethical breeders.

You’ll want to pick a reputable breeder and avoid backyard breeders as well as puppy mills. The issue arises because dogs in these sorts of breeding circumstances are frequently inbred.

It can result in a variety of genetic disorders and diseases, as well as temperamental problems. Before purchasing a puppy, it’s a good idea to visit the breeding facility, meet the parents, and inspect the premises to ascertain the breeding environment.

Pit Bull puppies purchased from local breeders range in price from $1300 to $2500. These puppies frequently share a lineage, are over 95% purebred, and are reared exclusively as pets. Pit Bulls from reputable breeders are costly, ranging between $2500 and $6000 for each puppy.

How is the Cost of a Pitbull Calculated?

Is a Pitbull Puppy a Good Family Dog?

There is a reason why Pit Bulls are dubbed “nanny dogs.” That is because they are so kind and caring with youngsters.

Pit Bulls are a devoted, people-oriented breed that thrives in a family environment. A well-socialized Pit Bull puppy will adore the entire family, even children. They are faithful and loyal, and while they are often trusting of strangers and make ineffective guard dogs, they will defend their families if they see the danger.

While Pit Bulls do not make effective security dogs due to their overwhelming affection for people, they may intervene if someone threatens “their” humans. Pit Bulls make excellent companions for youngsters. They love adults as well as youngsters.

Pitbulls are excellent with children if properly taught and socialized early, as is the case with any breed. Pitbulls are typically highly loving, loyal, and obedient to their owners. They like playing and cuddling, which makes them the ideal children’s friends.

Are Our Pitbull Puppies Dangerous?

No, Pitbull puppies are not dangerous if appropriately trained at a proper age.  However, detractors argue that pit bulls are fundamentally dangerous regardless of their treatment, as aggression is ingrained in their DNA. When pit bulls are handled appropriately and taught appropriately, they are less likely to display undesirable characteristics.

Pit bulls bite the most of any breed. In the United States, there is no system in place to reliably document dog bites and attacks, and many instances go unreported. Pit bulls are violent by nature and are more prone to attack their owners and other people.

Pit bulls are not born with the ability to tear apart another canine, animal, or human being. They are trained to fight by individuals motivated by profit and the desire to provide “entertainment” in the form of a dog battle.

In many instances, these dogs are forced to battle to the death, and those unable to continue are abandoned or murdered by electricity, shooting, or other horrific methods. Then it is not the dogs that are cruel and violent, but those who train them.

Even dogs often considered gentle and loving (which they are, with proper care), such as Bearded Collies and Chihuahuas, scored lower than American Pit Bull Terriers.

Is a pitbull Purebred?

They are medium-sized, well-built, and brilliant shorthair dogs, brimming with vigor, confidence, and zest for life.

Although American Pit Bull Terriers are highly adaptable, they still require adequate socialization and instruction due to their strength and different aggressiveness against other dogs.

They are medium-sized, well-built, and brilliant shorthair dogs, brimming with vigor, confidence, and zest for life. However, this feature is uncommon in people, and their devotion, stability, and affection for children make them trendy family dogs.

Although American Pit Bull Terriers are highly adaptable, they still require adequate socialization and instruction due to their strength and different aggressiveness against other dogs.

However, This feature is uncommon in people, and their devotion, stability, and affection for children make them a top-rated family dog.

American Pit Bull Terriers are not recommended for anyone who can provide them with little or no attention. They must be taught and socialized from an early age to overcome the breed’s proclivities for stubbornness and bossiness, which, when paired with his power, may make him difficult to handle if he hasn’t learned who is in charge.

In public, your American Pit Bull Terrier must be on a leash to avoid aggressiveness toward other dogs. Allowing these canines to roam freely at dog parks is not a brilliant idea. While they may not initiate conflict, they never back down from it, and they fight until the last end.

American Pit Bulls who are not socialized properly as puppies may develop aggression against other dogs. Almost often, breed-specific regulation encompasses It breeds. If you travel with your dog, be informed of the rules in your area and surrounding regions.

American Pit Bull Terriers have a strong chewing instinct, and their powerful jaws quickly destroy cheap or fragile toys. Provide your dog with only solid and sturdy toys that are incapable of being chewed up and ingested. They are best suited to owners who can provide consistent, challenging, and fair training.

Labradoodle vs Goldendoodle: Similarities and Differences