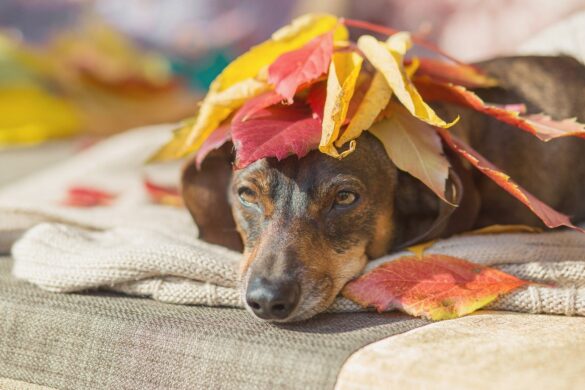 Dachshund dogs are popular with many other names like hot dogs, sausage dogs, wiener dogs Dachels, Teckels, etc., in Germany. This dog breed has two different varieties; besides the long-haired dachshund, the other two are wire-haired and short-haired.

Miniature Dachshunds weigh under 11 pounds and adults between 16 and 32 pounds in the USA. If your Dachshund’s weight is between  11 and 16 pounds, he is then known to be Tweenies’.

While in other countries, such as Germany, there is a broader degree of variation based on measurements of the chest taken at 15 months of age. On this basis, they are known as miniature and standard.

Dachshunds’ addition to your family is a delight, which is why it is ranked among the top most popular breeds of dogs from the 1950s till today.

Dachshunds have long muscular bodies standing on their short legs. They give an intelligent, bold look when with their elongated head held high.

Due to their comical appearance, the dachshund dog breed has long been a favorite for toymakers and cartoonists. But their funny appearance helps them for many practical tasks such as digging, and their large chests provide plenty of area to the heart, enabling them to fight badgers.

Daschunds are mainly bred for hunting. This dog breed loves to prey, dig, and chase. They are native to Germany and originated 600 years ago.

They have a tremendous smelling sense and small size, which make them famous. The long-haired type is meant to hunt in winters.

This dog breed has been very popular in Europe for several centuries and was kept by royal courts. Even Queen Victoria had this dog breed.

Later in the 1800s, the breed became more refined and became popular in the United States and England, which is now the present-day dachshund, which we are familiar with today.

These dogs are stubborn and difficult to train, so be aware of thinking to keep them as pets for the first time. see Dachshund Club of America for the breed standard.

Characteristics of the Dachshund Dog

Dachshunds come in different coat colors and eye colors with a pointed nose, short legs, and long bodies. Those with darker coats generally have dark eyes. Though their legs are short, they are firm, which makes them excellent diggers.

Dachshunds stand low on the ground, with the miniatures only 5-6 inches in height and the standard 8-9 inches tall.

Some of these dogs also have solid colors such as wheat, cream, wild boar, and red. Some standard breed dogs also come with markings of sable, brindle, and dapple shape.

From their name, they are long-haired. Their coats are generally silky and soft, with feathering near their ears and neck. Long hairs are also present near their tail, legs, and stomach. Their hair can grow so long to trail on the floor.

Long-haired are curious buddies having a strong sense for smell and experts in their digging skills; nothing can stop them from digging your backyard to find a burrowing animal.

With unfamiliar people in their surroundings, they can be unpredictable. With other bigger dog breeds, they will fight with them in most cases.

In frightening conditions, like most other small dogs, Daschunds can become aggressive and vocal. Their vocality and loudness increase if something is going on in your home, making them uncomfortable.

Make sure not to leave your long-haired friend alone for long; otherwise, he can start chewing and barking.

The short little friend is strong-willed and stubborn- once he has made his mind to something, it is difficult for you to stop him. Despite all their intelligence, they won’t listen to you if they don’t feel like it.

It is not impossible to train a Dachshund as they are smart dogs, but you need to be patient and consistent to get the results.

If your Dachshund has a favorite food or toy, utilize it during training. You can motivate him by giving these as a reward during the training if the dog obeys.

The key to train a dachshund is to start early at a young age. Try to use positive reinforcement and not punish the dog during training; otherwise, it can lead to adverse behavioral effects.

Socializing this breed with other pets and children is vital, and that also during an early age, to make them habitual in social behavior and friendly with others.

Praise them and provide them treats when they have a pleasant experience. Keep them busy and mentally stimulated; otherwise, they can destroy your furniture and socks if idle.

Dachshunds, especially the long-haired, don’t mind living in apartments and houses. They can thrive well in a loving home and surroundings. Due to their long fur, grooming needs are more as compared with other dachshunds.

Their exercise needs are not too much; just one hour each day is enough. These dogs are prone to weight gain, so bursts of daily walking are necessary. You can take him for a walk for 30 minutes in the morning and 30 minutes in the evening.

Due to their long fur, you need to adopt a regular grooming schedule. This requires training them when young so that they allow you to brush daily.

Their long hair can grow to touch the floor, so you need to visit a groomer to give your Dachshund a haircut! Their fur will carry the dirt with it if allowed to overgrow, making the coat dirty, causing tangles and matting.

Frequent bathing is not needed; if done so, it will wash off their natural oils, causing drying up of their skin.

Dachshunds’ common health problem is IVDD, known as intervertebral disc disease, which affects their spines and causes short legs. It is an inherited problem that trust-able breeders can reduce to decrease the risk of getting this disease in pups.

Another common problem in Dachshunds is Patellar Luxation, which is the dislocation of knee caps.

Dachshunds are prone to Epileptic seizures. This condition could be either genetic or due to an injury to the head. If such a health issue is seen, it is better to consult a veterinarian. Epilepsy can be controlled by medication in many cases.

Other health issues are Progressive Renal Atrophy, which is Atrophy of the retina, which results in loss of photoreceptors present in the back of the eye, ultimately leading to blindness. It is better to have a DNA test before breeding the dog to avoid PRA in pups.

The increased production of Cortisol could be due to an imbalance in the adrenal or pituitary gland. A common sign in a dog suffering from this disease is frequent urination and excess drinking of water.

Sticking to a strict diet is very important; otherwise, your Dachshund will gain weight very quickly. Gaining extra weight can cause pain in their back, resulting in rupture or slipping of their discs.

Avoid giving them extra feed, no matter how cute they look or how much they cuddle. Adult dogs are comfortable with high-quality dry food, but it should have lesser filling ingredients.

The quantity of food depends on the age, physical activity level, and size of your dog.

Where To Adopt or Buy Dachshunds

You can adopt Dachshunds from a nearby shelter or some online sites such as adoptpet.com, which tells this breed’s availability in nearby locations by just filling an online form.

National Breeds Club and Rescue also tells the availability of this dog breed in more than 450 Rescue groups in the USA developed by American Kennel Club.

Some Websites To Buy or Adopt a Dachshund

Other Breeds To Read About;