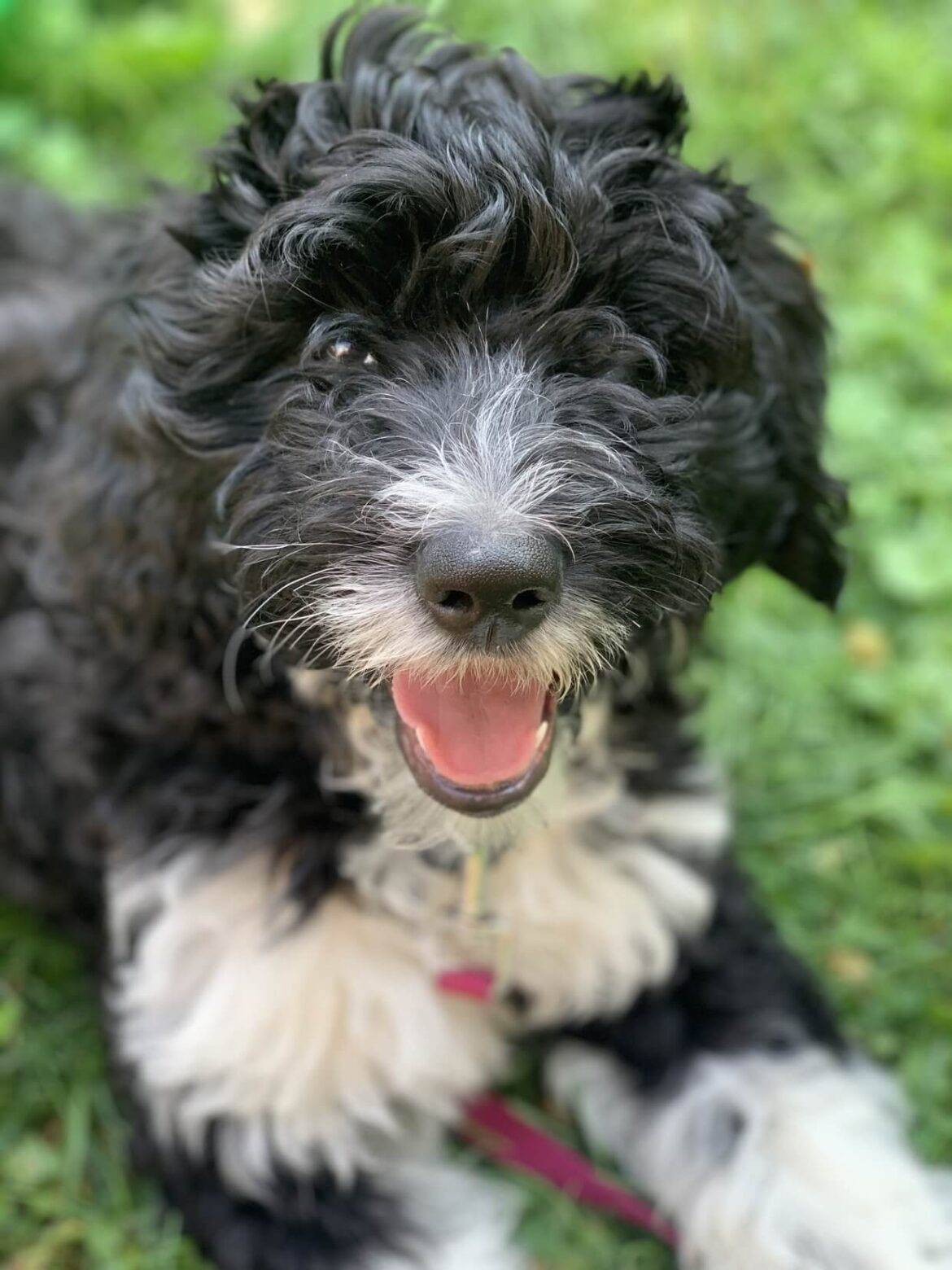 An F1 Labradoodle is a cross between a purebred poodle and a labrador retriever. The result is a dog that is 50% Poodle and 50% Labrador Retriever. This results in what some consider to be a classic Labradoodle or first generation.

Conceiving the Labradoodle this way is both wrong and right. The dog is a Labradoodle, but a lot of experts do not consider the Labradoodle a breed. Instead, it is a hybrid of two breeds. Even at an F1 level, you may not always get the same characteristics.

History of the Labradoodle

The breed has gotten quite popular, and people have used them for all purposes now. They have proven to make great guide dogs. This is in part due to the fact that they are smart. A Labradoodle is also a good choice for someone who wants a guide dog that they aren’t allergic to and won’t trigger allergies in others.

Appearance and Size of F1 Labradoodles

Labradoodles are considered to be medium-sized dogs. The F1 Labradoodles get between 21 and 24 inches tall and can weigh between 50 to 65 pounds. Because of the hybrid nature of the breed, the appearance of a Labradoodle can vary greatly. For the most part, though, many F1 Labradoodles have straight, curly or wavy coats.

All dogs, even from the same breed, are different. You can never know their temperament until you meet them. For the most part, though, F1 Labradoodles are heralded as a gentle breed that is outgoing and playful. They love to meet new people and dogs.

You will notice that almost all F1 Labradoodles have a fair amount of energy. They are not herding dogs, though, so they can dispense of this energy in a wide variety of ways.

One prominent way that the F1 Labradoodles express their temperament is by wanting to be the pack leader. They desire to be at the front, leading the way, so you must sometimes be firm to command their obedience.

Something interesting about the F1 Labradoodle is that they are very active but also will tolerate being left alone for a while. That is, once they have grown out of their puppy stage. Most puppies do not do well alone.

F1 Labradoodles can have straight, curly, or wavy coats. Because F1 labradoodle is part Labrador Retrievers, they may inherit the straight coat. This means that some F1 Labradoodles may shed a lot or not much at all if they inherit more of the Poodle genes, and depending on the dog and time of year. You never really know how much for sure an F1 Labradoodle will shed.

In general, a Labradoodle coat is somewhere between medium and long in length. The more Poodle that is in the breeding, the more curls that you will see.

The colors of F1 Labradoodles can vary. Some may be brown or chocolate, while others can be red, gold, cream, black, or white. While some Labradoodles are a single color, others will be bicolor in pattern and contain a mix of the above colors.

The lifespan of an F1 Labradoodle to be around 12 to 14 years on average. Non-standard Labradoodles, such as those mixed with a miniature Poodle, will see slightly longer lifespans.

Training and Care of F1 Labradoodles

F1 Labradoodles are considered to be very intelligent dogs and can be easier to train. They can be trained to do a variety of different tasks. They make great service dogs and can even be trained for some other tasks.

Keep in mind that if you screen your breeder well, you will find that there are far fewer health issues. Many health issues come from poor breeding or poor choice in breeding partners.

Food is something that needs to be addressed on a dog-by-dog case. That being said, you can gauge the basic needs of the dog based on the breed or hybrid of breeds. As a medium-sized dog, an F1 Labradoodle will require between 2 to 3 cups of food.

Feed your dog the freshest and most natural food you can. Fresh and natural food is healthy for your dog and will give them the nutrients they need in the best way possible for their body. Plenty of companies now will deliver fresh food to your door every week.

When in doubt it’s best to consult your veterinarian about your dog’s dietary and nutritional requirements.

Labradoodles can be quite expensive, especially the closer to an F1 mix that you get. F1 Labradoodle can cost between $1,200 and $4,000 on average from a reputable breeder.

Pros and Cons of Owning a F1 Labradoodle

Do all F1 Labradoodles shed

A good amount of people are in search of an F1B Labradoodle as they are more hypoallergenic due to the larger percentage of Poodle in the breeding.

F1 Labradoodles have a great temperament and are quick learners. They are gentle, playful, and loyal dogs who love pleasing their owners.

Yes, Labradoodles, like most other dog breeds, will require frequent grooming and hair cuts.

Is F1 or F2 Labradoodle Better

In most instances, an F1 Labradoodle is better than an F2 because they’re more predictable. It’s hard to predict the traits and appearance of an F2 Labradoodle because it’s a mix of two F1s and experienced breeders steer away from selling F2 Labradoodles because of this reason.

Where to Get a F1 Labradoodle

Other places where you may be able to find an F1 Labradoodle are; Petfinder, Adoptapet, Prideandprejudoodles, and PuppySpot

F1 Labradoodles make great pets, great to have as a companion, even for those who have kids in the home. With little to no prey drive, they are also good for those who have other pets. Getting a Labradoodle tends to be a big investment though, most need to prepare for that.  Other than that, you will love your new puppy.

Labradoodle: 18 Things You Should Know