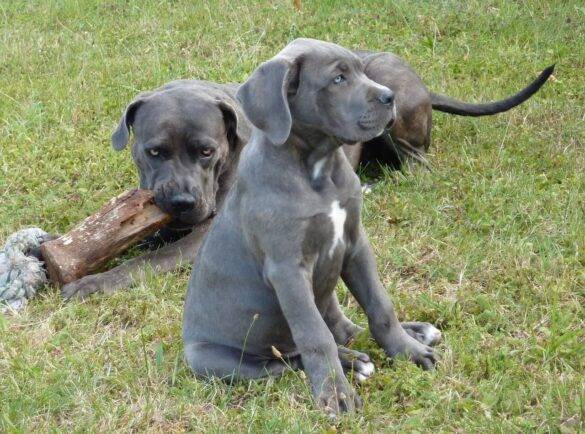 Blue Cane Corso refers to a breed of dog that is identifiable through its muscular appearance and strong personality. Cane Corsi were recognized by the American Kennel Club in 2010 and the United Kennel Club in 2008.

What is a Blue Cane Corso

Blue Cane Corsi are a subspecies of working dogs known as Molossus dogs, believed to have been bred by the Greeks to have big bones and strong muscles for farm work. The dogs were then brought to Italy by the Romans and, when bred with local Italian species, formed the Cane Corso breed.

Blue Cane Corsi were originally used as guard dogs because of their agility, strength, and loyalty. The Romans often traveled with Blue Cane Corsi. Thus, the dog became known as a ‘war dog’ and a ‘guard dog.’ The breed remained popular for centuries until it nearly went extinct in World War II.

In fact, with good training, Blue Cane Corsi are not any more aggressive than other big dogs. The dog is highly intelligent, which makes the training process slightly easier. However, the dog has a natural ‘bossy’ instinct, which must be considered when getting a Blue Cane Corso.

One of the most important factors to remember about a Blue Cane Corso is that the breed is a natural guard dog, and any fear or unnatural movements by others may make the breed become defensive. Blue Cane Corsi are also incredibly loyal and have a deep love for their owners.

The breed is also highly alert and pays close attention to all that goes on around it. Because the Blue Cane Corso was bred as a working dog, the breed has a high tolerance for stress. Most sounds and sights shouldn’t overwhelm the dog.

However, the dog’s intelligence and the general ‘bossy’ attitude mean that the dog should be trained thoroughly before introduction to a family. Without proper training, the Blue Cane Corso does tend to dominate family life. Blue Cane Corsi may, however, have issues with smaller children due to the unpredictability of small children.

Many people have different opinions about if the blue Cane Corso exists at all, and some believe it’s the Cane Corso’s light black pigment grey that makes the Cane Corso look blue and thinks that the Blue Cane Corso is a gray coat coloration produced by a “recessive mutation in the melanophilin gene (MLPH).

Most dry dog food is okay to feed a Blue Cane Corso, as they are not super sensitive to different types of food. Blue Cane Corsi are susceptible to being overweight, so it’s best not to leave food out all day for the dog, and it’s crucial that the dog’s appetite is monitored.

Blue Cane Corsi are highly intelligent, meaning that they require mental stimulation every day in order to remain healthy. Cognitive toys are perfect for this type of dog.

Blue Cane Corsi should be trained in order to avoid aggression and other behavioral problems. The dog is best trained from a young age and should be exposed to early socialization situations to get used to other dogs and people. Blue Cane Corsi are responsive to training and generally are easy to train because of their intellect and loyalty. Training is a crucial aspect of owning a Blue Cane Corso.

These include hip dysplasia, eye problems, demodectic mange, and bloating. Some of the ailments are hereditary, such as hip dysplasia, and the breeder should provide paperwork proving that the puppy does not suffer from such ailments. Proper feeding can help to prevent or treat gastrointestinal issues.

Blue Cane Corsi are large dogs with a rich personality. Originating in Ancient Rome as a ‘war dog’ and surviving centuries as loyal guard dogs, the Blue Cane Corso is a loving dog that will treat its owner well.

The dog itself is incredibly intelligent and requires intense mental stimulation to avoid boredom and depression. The dog is also intensely loyal, leaving it subject to separation issues. The dog also requires a lot of physical activity in order to remain healthy. Overall, the breed is typically healthy and, with proper care, usually lives 9-11 years.

Blue Cane Corsi can make for a good family dog, but proper training is a must. Without proper training, the dog can potentially be aggressive. Overall, the dog is best for experienced owners and families who understand the potential risk of aggression. The dog is highly alert and attentive and easily picks up on nervousness or unnatural actions.

Blue Cane Corsi are an intensely loyal and loving dog, an ideal pet for those who have experience owning similar dogs and understand the physical and mental demands of the Blue Cane Corso.