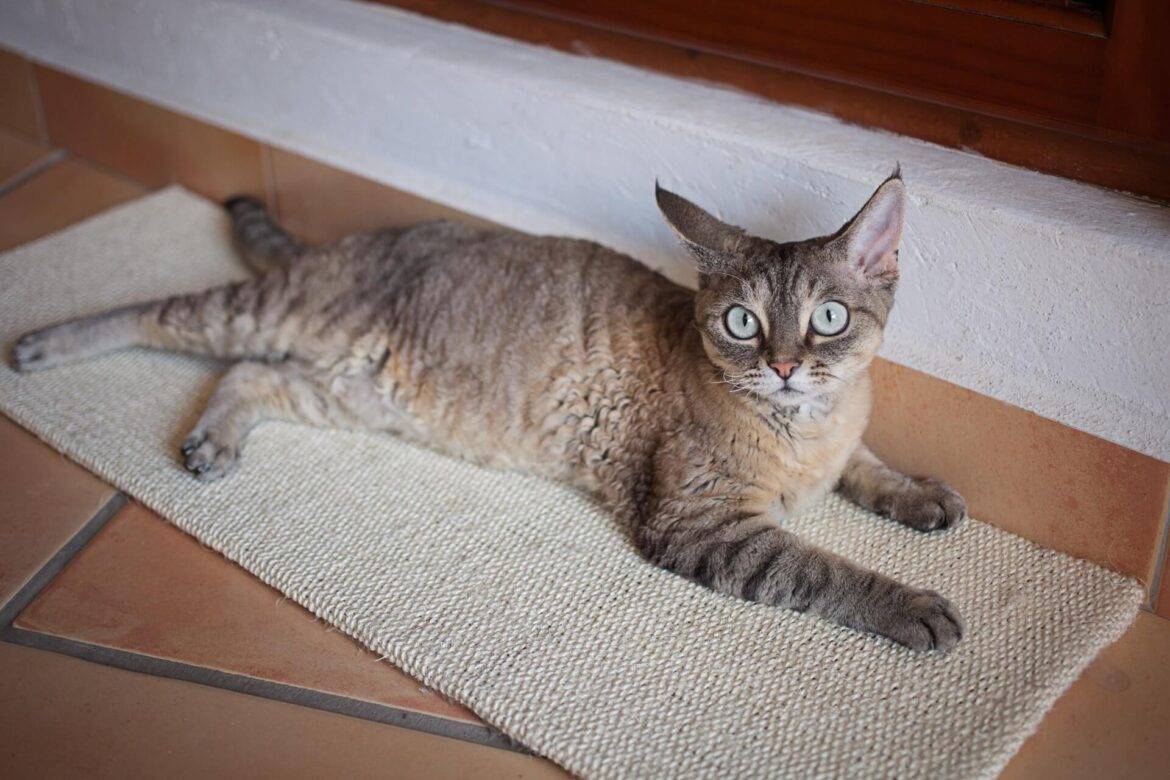 Curly-haired cat breeds gain popularity in recent years and include some of the feline world’s most beautiful and kind cats.

Cats with curly hair are excellent friends first and foremost, with coat type and size being secondary considerations. However, with these curly-coated cat breeds, personality is the star, and the waves are a sideshow.

Curly-coated cats are typically the product of a mutation. Different breeds take time and the committed efforts of professional breeders to produce, which means that some of these amazing cats are rare and rather costly.

Curly-haired cats shed less and may not hut at all. It has prompted some to label them as hypoallergenic, and allergy patients may look to these breeds as a way to safely keep a cat without experiencing cat allergy symptoms.

Curly-haired cats are exceedingly uncommon, and this oddity suggests that the cat’s natural hair lacks at least one layer. They have a central, softer layer known as awn hair and a short, soft layer known as down hair. When one of these layers is absent, a cat’s coat may be curled.

Curly-haired cats are exceedingly uncommon, and oddity suggests that the cat’s natural hair lacks at least one layer.

Cats have a thick outer layer of hair called guard hair that protects them from the elements. They have a central, softer layer known as awn hair and a short, soft layer known as down hair.

When one of these layers is absent, a cat’s hair may be curled. It is an uncommon occurrence in a single cat, and breeding It feature has not always been successful where it has occurred.

A typical domestic cat’s coat contains three distinct hair textures. In general, the outer coat is pretty straight and rigid. Its layer, referred to as “guard hairs,” offers insulation and may help prevent rainwater from reaching the skin.

The intermediate layer is referred to as “awn hair,” It is not as long as the outer coat, but it is typically thicker and softer. The undercoat, or “down hair,” is the third layer. Down hair is exceedingly fine, short, and silky.

Cats with curly coats lack or modify one or more components of the standard three-part cat coat. It is what causes the curls and frequently results in reduced shedding or none at all.

The majority of curly-haired cats either do not shed at all or shed very little. That is why many individuals with cat allergies find curly-haired cats less irritating, although It is a subjective opinion that cannot be confirmed.

Curly-haired cats frequently have curly whiskers and brows as well! See hypoallergenic cat breeds for the most acceptable options and guidance for people allergic to cats.

Additionally, Devon Rex cats are one of the tiniest cat breeds.

There are four most popular Curly Haired Cat Breeds:

A big cat with a rounded head and muscular limbs, the Selkirk Rex is a large cat. It is a cat of average size with a broad and round head. It often has a long coat and is adored for its teddy bear appearance, including nearly woolly fur.

When the cat reaches the age of two, its soft and silky coat will develop. Curly hair covers the cat’s entire body but is often more prominent on the neck and tail.

Curly hair, on the other hand, emerges at birth, naturally straightens, and then reappears between the ages of eight and ten months.

Although the breed is not very loving or athletic, it can have a remarkable and unusual appearance. Its breed is typically kept as indoor cats due to its lack of activity and excitement, among other characteristics.

Additionally, the Selkirk Rex has wavy whiskers, and all cats of Its breed can be traced back to a single cat named Miss Depesto.

Unlike the other Rex cats, its breed contains cats with long or short fur.

LaPerm cats highly love and like spending time with their people. They’re also highly attuned to their owners, which means that while they enjoy being active, they’re pretty content to rest and relax with you.

LaPerm kittens can be born with or without hair, but they nearly always shed their coat when they reach the age of six months. These clever felines, like learning new tricks and clicker training, are a fantastic way to bond with your cat while teaching them new ones.

The LaPerm cat’s coat is short and wavy, giving the breed the appearance of having just awoken. In comparison to the Selkirk Rex, Its breed is noted for being friendly and pleasant with humans.

They will stalk you around, hoping to be seen, and they seek attention, which they are sure to receive in abundance because of their remarkable and distinctive appearance. These are accessible in a variety of colors and patterns.

They come in both short- and longhaired kinds, but if you acquire one as a kitten, are prepared for its curly hair to vanish shortly after birth and reappear around the age of ten months.

The Devon Rex, also known as the pixie cat or alien cat, is a gorgeous and unusual-looking feline with big ears and a thin physique. They originate in Devon, the United Kingdom, and are appreciated for their intellect and appearance.

Devon Rex coats are tightly curled, and their whiskers are either sparse or nonexistent. Their hair is often short, and their eyes are large. The curly coat is exceptionally delicate, and the breed is prone to over-grooming, resulting in patches with no fur.

Their enormous ears are set low on their heads, giving them a pixie-like appearance that breed enthusiasts find appealing. These social cats like company and are frequently naughty and playful. Not only does the breed love, but it is also quite active and would willingly do tricks to earn its owner’s love.

Cornish Rex is a social creature and wants to be surrounded by humans the majority of the time. They will struggle in a house where their owners are gone all day at work.

Cornish Rex has some morphological characteristics with the Devon Rex due to its thin build and big ears. The Cornish Rex lacks guard and awn hair, possessing just a soft undercoat.

Its gentle cat is similarly comparable to the Devon Rex in that it desires, no, demands, its owner’s attention, and affection. Additionally, it is an agile and athletic cat that is capable of eternal running and playing.

How Much Do Curly-Haired Cats Cost?

If you desire a curly-haired cat, you should be aware that they are sometimes challenging to locate and adopt from shelters. There may be only a handful available for adoption across the whole United States at any particular moment.

However, these cats are incredibly costly. Typically, they will cost up to $1,500. As a result, the best (and typically only) method to obtain a Selkirk Rex is to contact a reputable breeder.

The other three cat breeds – Devon Rex, Cornish Rex, and LaPerm – are similarly priced. Generally, these three are slightly less expensive than the others, but not much. Expect to pay between $1,150 and $1,500 for a curly-haired cat.

Where Can You Buy a Curly-Haired Cat?

Curly-haired cats are pretty tricky to locate, owing to their rarity. Additionally, they are in high demand, which means that people will rapidly get a curly-haired cat. As a result, your best way of action is likely to search around for a trustworthy breeder who offers one of these dogs.

Rex Cat breeds, such as the Devon and Cornish Rex, are known for their wavy, curling fur. The breeder crossed the Selkirk Rex with several other cats, including American shorthairs, Persians, Himalayans, exotics, and British shorthairs, to develop two distinct coat types: long and short.

Shedding is less common in curly-haired cats, and they may not shed at all. Longhaired cats may emit less allergen into their environment than short-haired cats since their long fur better traps the protein against the skin.

There are more “hypoallergenic” cats, the most common of which are hairless. However, Siamese are pretty cheap and are genuinely beautiful cats!

As a result, some people refer to them as hypoallergenic cats, and allergy sufferers may look to these breeds as a safe way to keep a cat without dealing with the symptoms of cat allergies.

Contrary to common perception, there are no hypoallergenic cats. Particular cats are suggested for allergy patients over others owing to the amount of protein they generate.

Air purifiers are excellent at eliminating these microscopic particles and relieving allergy and asthma triggers. Additionally, air purifiers eliminate pet odors that circulate in your interior air, ensuring that you never detect odd smells emanating from your dog or cat.

Each curly-haired cat breed has a unique genetic mutation, explaining why their curly coats vary in texture.

Like the Devon Rex, certain curly-haired cat breeds lack an undercoat entirely, resulting in a smooth short skin composed solely of guard hairs. Similarly, like Selkirk Rex, others have a thick and profuse coat that is either short or longhorn.