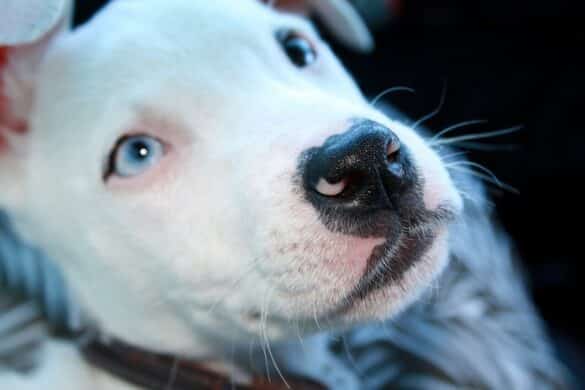 Although rare, Pitbulls with blue eyes look beautiful and admirable. Their sweet, expressive eyes are worth a second look. Besides their adorable nature comes a host of controversies and questions which can be quite hard to answer.

With people adoring the blue-eyed Pitbulls, some breeders take advantage of that and place a high price tag on these dogs. Of which most unsuspecting dog owners fall into.

So do you want to learn the truth about blue-eyed Pitbull? If yes, here is a detailed article that will answer some frequently asked questions about them.

History of the Blue-Eyed Pitbull

The history of the Pitbull dates backs to the early 1800s from Old English bulldogs. Now extinct, these bulldogs were popular in the game of bull-baiting. The UK government later outlawed this sport in 1835, where now people turned to dogfighting and ratting.

As these games required more agility and speed, breeders bred the old English bulldog with the terrier to get more superior dogs who would excel in this sport.

Afterward, Immigrants from the UK traveled with these dogs to America. These dogs began working as herding dogs and protection dogs, while others were absorbed as family companions.

The Appearance of the Blue-Eyed Pitbull

Despite its unique blue eyes color, the blue-eyed Pitbull is no different from other Pitbulls with the default brown eyes.

Like most Pitbulls, the blue-eyed Pitbull is masculine, having a short, smooth coat that is soft to touch and a distinctive small whip-like tail. Also, this dog can weigh between 30-90 pounds.

Temperament and Personality of the Blue-Eyed Pitbull

The odd eye color of the blue-eyed Pitbull doesn’t affect its temperament. These blue-eyed Pitbulls love being close to their owners, thriving in lots of attention and affection. Other than that, this dog is loving, loyal, and courageous.

The blue-eyed Pitbull is one of the best home companions even with its awful history and ill perception that most people have of this dog.

Finding adult Pitbulls with blue eyes is often uncommon, unlike finding blue-eyed Pitbull puppies. Like most puppies, Pitbulls are born with blue eyes. And such occurs because there is inadequate production of melanin.

What Type Of Pitbull Has Blue Eyes

All Pitbulls can develop blue eyes. However, some factors may predispose a Pitbull to have this eye coloration down from puppyhood to adulthood.

Let’s look at them—

Dogs with the merle gene are more likely to have blue eyes. This merle gene causes dilution of the color found on your dog’s coat, nose, and more so the eyes.

For example, if you have ever seen a dog with different patches of color on its coat, then probably it’s a merle gene carrier.

Although it’s unethical, breeders who want to have a litter of Pitbulls with blue eyes ensure both parents possess this gene.

When only one parent of this puppy has this gene, there is a low probability of getting a blue-eyed Pitbull.

Melanin is a coloring pigment that gives your dog the normal eye or coat color. The concentration of this pigment can determine the eye color of your dog. Pitbull dogs with high levels of melanin will have dark brown iris. However, dogs with no or less melanin will more likely develop blue iris.

Dogs with albinism have a high chance of having blue eyes.  Albinism occurs when there is less tyrosine, an important enzyme in the production of melanin. Less melanin production will lead to a blue-eyed Pitbull.

As earlier discussed, Pitbull dogs are born with blue eyes. Unless the puppy has the ALX4 gene defect, albinism, melanin deficiency, or the merle gene, later, this blue eye color will be replaced by the default brown color.

Some Pitbull puppies may stay with this blue eye color for four months, whereas others may last with it for two months.

If your puppy Pitbull has stayed with this eye color for more than six months, then don’t expect much to change; this will be the dog’s default eye color.

Keynote: Since most people love unique dogs, particularly Pitbulls with blue eyes, some unscrupulous breeders take advantage of that. They tend to lie to innocent dog owners that these dogs will stay with this eye color. In return, these breeders overcharge a lot in the name of selling unique and rare blue-eyed Pitbulls.

Don’t fall for such breeders. Most breeders who concentrate on the dog’s physical appearance are not to be trusted as they may sell you sick dogs or dogs who have unbalanced temperaments.

Probably you have seen this question a lot, and you’re unsure whether what you’ve heard is true or wrong. Contrary to most dog owner’s beliefs, not all blue-eyed Pitbulls will go blind.

However, as we earlier discussed, a Pitbull with blue eyes has a merle gene carrier. And this gene cause variation in coat and eye color.

If such a dog is bred with another merle carrier, there are probabilities of getting a litter predisposed to blindness.

However, if it’s only one parent with this gene (Mm), then the chances of having a litter predisposed to blindness is minimal.

The blue eyes in a Pitbull don’t mean your dog is at risk of any health condition and a blue-eyed pitbull can still live long.

However, if a breeder used backward ways of breeding, like breeding two merle carrier dogs together, then the resulting litter with blue eyes may be at risk of various health risks.

Often blue-eyed Pitbull bred through dubious means can have various health risks waiting for them. For example, blindness, deafness, or both of them.

What you need to know: Your blue-eyed Pitbull could be suffering from Interstitial Keratitis. This ocular disorder occurs when there is corneal inflammation. And one of the signs is that your dog will have a bluish-white fluid covering his cornea.

This type of keratitis is caused by the same virus that causes hepatitis. If your dog presents with a persistent cloudy cornea, the best thing is to contact the veterinarian.

Blue-eyed Pitbulls have no problem with their eyesight. Not unless there is an underlying condition. Your Pitbull vision will rarely be affected by his odd eye coloration.

However, as your dog grows old, he may become predisposed to other eye defects like glaucoma, affecting his general eyesight.

What Is A Merle Pitbull

Merle Pitbulls have a high concentration of the merle gene. This gene dilutes the primary color or pattern of your dog coat. The merle Pitbull with this gene has random black, brown, beige, or white spots on the coat.

How Much Does a Blue Does Eyed Pitbull Cost

Purely bred blue-eyed Pitbulls can be expensive. Expect a price range of between 800- 20000 dollars.

The breeder’s preference and location may determine this dog’s price.

Additionally, when purchasing a blue-eyed Pitbull, ensure you run away from unscrupulous breeders who will lie to you that blue-eyed puppies will forever be blue-eyed. Some of them may be having genetic defects. With that, we advise that a breeder show you all the health clearance certificates of the puppy and its parents. Both parents should have no hereditary diseases.

Should I Get a Blue-Eyed Pitbull

Blue-eyed Pitbulls are great dogs to have in any home. They will spice up your mood now and then.

As always, before deciding to settle with this dog, look for a reputable breeder who will be ready to answer all the questions you may be having.

Any breeder who seems reluctant to answer some questions may not be authentic. Lastly, if you are ready to quench the needs of this dog breed by exercising, training, and feeding it well, then nothing should deter you from getting a blue-eyed Pitbull.

Where To Find a Blue-Eyed Pitbull

Visit a Pitbull breeder and enquire about the possibilities of getting this Blue-eyed Pitbull. As always, visit a reputable breeder who will reveal everything about the puppy and its parents.

If the breeder is charging you high, you can look for a blue Pitbull in a rescue center in your area. Look in the nearby Pitbull-only rescue center or a general animal rescue center.

Often puppies you will get here are low priced, and they tend to be healthier. Also, try Adoptapet or Petfinder.

That is all about the blue-eyed Pitbulls. As you can see, these dogs are more similar to other Pitbulls with the default brown-eyes. Even with their odd eye colors, these dogs can be great family pets.

So do you own a blue-eyed pit bull? How have you been relating?