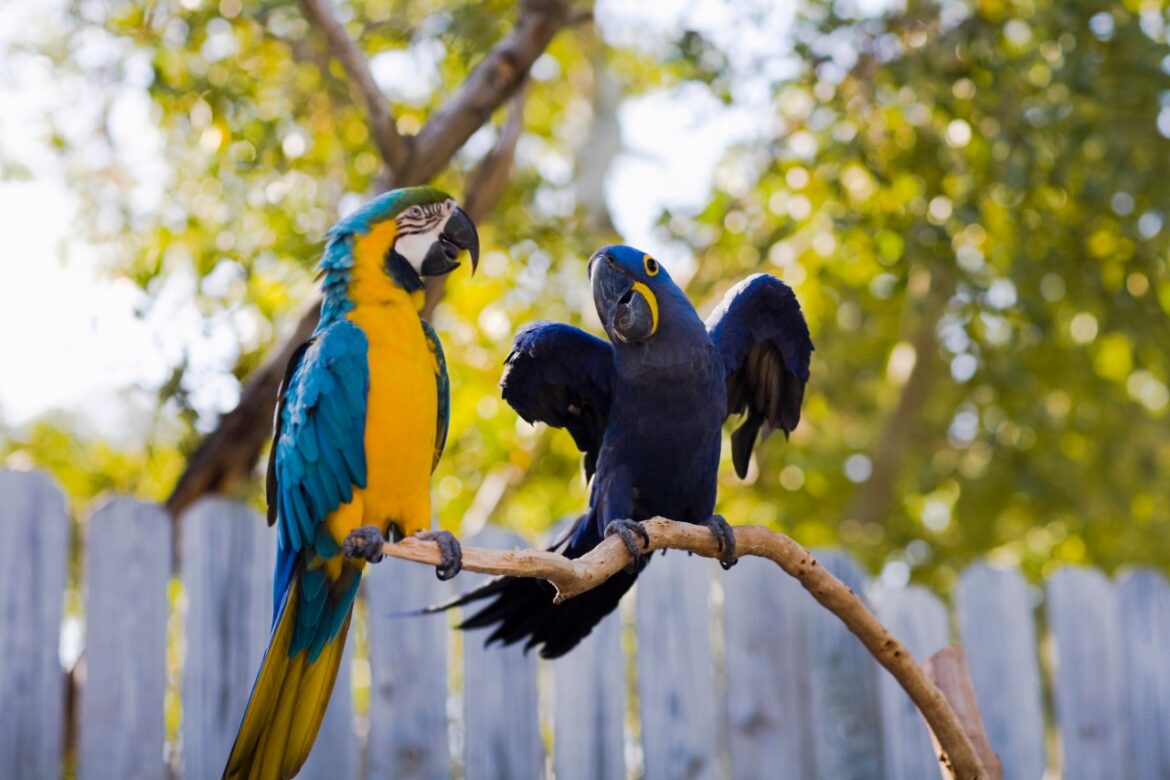 The Hyacinth macaw is a species of parrots that are found primarily in South America. It is known for being the largest flying parrot, its glowing blue color, and their strong beaks. There are several other features to this amazing bird that you may not have known.

Here are 15 interesting facts about the Hyacinth Macaw;

Hyacinth Macaws almost entirely feed on nuts. These nuts vary in terms of species and hardness, the nuts consumed in their diet are also particular to various geographical locations where the birds can be found.

The Hyacinth Macaws are known to have extremely strong jaws used to crack tough nuts and even coconuts. These birds also have softer tongues that can be used to feed on the fruits.

Despite the Hyacinth Macaw being natively found in the rain forest regions of South America, the birds majorly occupy relatively open swamps and woodlands.

They are also found in trees across rivers and open grasslands. Hyacinth macaws are rarely found in the dense vegetations of the rainforests. They are usually found on the outskirts and edges of dense areas.

As earlier mentioned, the Hyacinth macaw also happens to be the largest flying parrot with an average length of 100cm from its head to its tail. Its wings grow as much as 16 inches, and they usually fall within the weight range of 2.6 pounds to 3.7 pounds.

5. Use of intelligent methods of feeding

Hyacinth macaws have been observed employing various techniques to make feeding easier and more efficient. This behavior has been found in captive Hyacinth Macaws as well as those in the wild. These techniques involve the use of objects such as leaves and chips of wood while feeding on nuts.

The Hyacinth Macaw also develops slowly compared to other species. The young ones leave the nest after three weeks and take about six months to develop fully. This slow development contributes largely to their rarity.

Hyacinth Macaws are also noisy, which is typical of most parrots. Their loud nature is also complemented by their distinct size, imposing presence, and occasional recklessness. They are usually a handful in captivity and would require special care and attention.

The Hyacinth Macaw has a high-fat diet, but they metabolize the consumed fat well and incorporate fruits into their diets.

Hyacinth Macaw birds are prone to macaw wasting disease, a digestive disorder that the birds usually suffer. Given the selective diet of the birds and their unconventional feeding habits, it would be helpful to ensure that they avoid this digestive disease.

These species have long been under the threat of endangerment. This threat arises from the activities of humans, such as deforestation for cattle ranching and mechanized farming methods, habitat loss, and pet-bird trading.  Hyacinth macaws are vulnerable to getting capture because they are noisy, fearless, predictable, and dependent on palm trees.

A significant amount of action has been taken towards saving the Hyacinth Macaw species. Laws have been implemented in their native countries. These laws prohibit their trade and advocate for awareness and support towards preserving the species.

The hyacinth macaws are generally calm birds. But they are known to be loud birds with occasional inclinations to destruction, owing to their size and chewing habits. There are few cases of people keeping these birds as pets, although they usually come at an expense and might be hard to maintain, a small price to pay for having the companion of these beautiful birds.

Hyacinth Macaws can reach flight speed up to 35 miles per hour; this is due to their biological makeup.

These birds are known to travel in flocks of one to eight, and they loudly call to each other while traveling.

The Hyacinth Macaws species are playful and inquisitive. They are also capable of mimicking human vocalization – Isn’t that a talking bird.

The Hyacinth Macaws have various ecological importance. They are chiefly one of the key players in the regeneration of the forest area. This is because they drop plenty of seeds while feeding, and these seeds are grown to become the new trees in the forest.