What Do Dogs Dream About 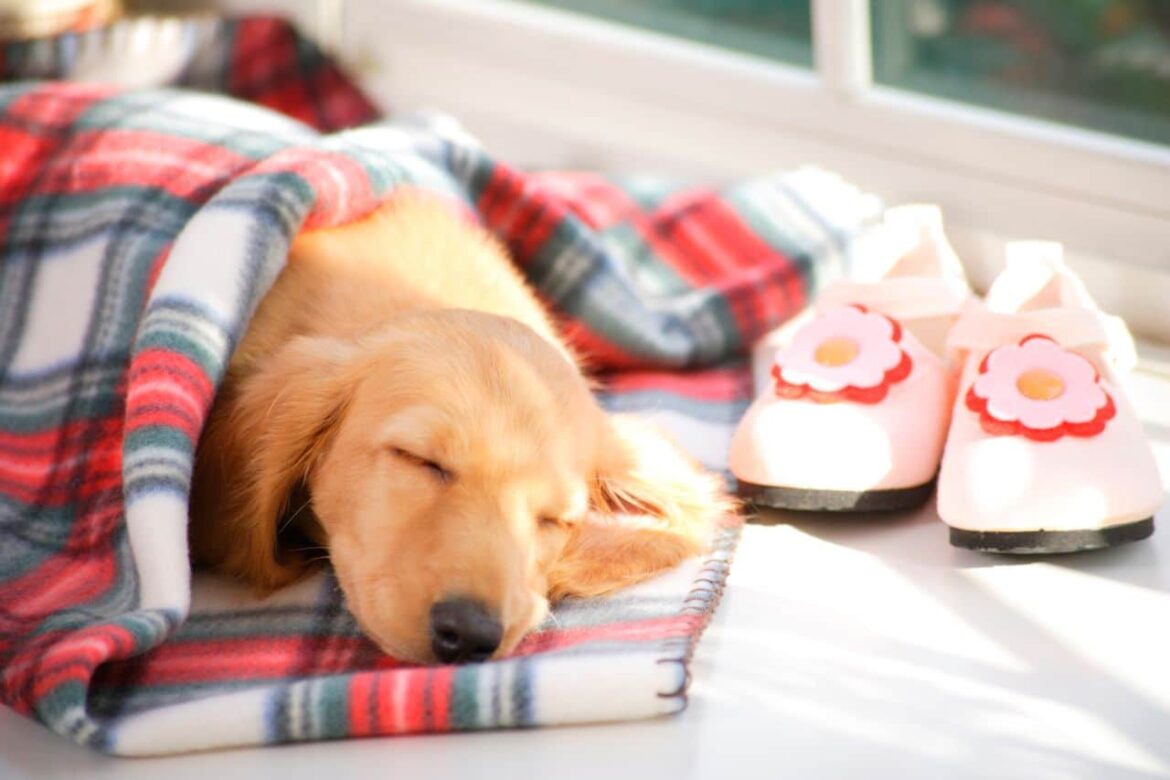 Yes, dogs can dream! Any mammal that goes through the rapid eye movement (REM) stage of deep sleep is likely to have dreams at some point. Humans, rats, and, of course, dogs are all included in this category.

When dogs dream, they are in the REM period, when their dreams are the most intense and realistic. Pups around 20 minutes generally reach the REM stage of sleep after falling asleep. Two to three minutes pass before they return to their original position. Dogs can have highly vivid dreams even in such a short period.

What Exactly are Dreams

Understanding the sleep process can assist in defining what dreams are and how they come to be. The natural state of being in which consciousness and voluntary muscular activity are diminished is known as sleep, and it occurs in both humans and animals.

Sleep is critical for growth because it provides downtime for the body’s systems to recharge. While sleeping, the brain continues to process information and experiences that occurred during the previous waking period.

This sleep cycle includes the activity of dreaming. As a result, while your dreams can be highly vivid and seem pretty natural, you cannot smell, taste, or feel anything since you are not conscious while you dream.

It has been revealed that the brains of people and dogs function similarly during sleep, with brain wave patterns that alter depending on the stage of the sleep cycle you are in. When you or your dog first falls asleep, you will be experiencing SWS (slow-wave sleep), characterized by slow and undulating brain waves.

A reduction in mental activity marks this stage of the sleep cycle, but the body is still active, indicating that it has not yet reached its complete relaxation. Your dog will appear to be sleeping peacefully, yet the sound of SWS can easily rouse him.

Later on, a deeper stage of sleep takes place, which is characterized by rapid eye movements. This stage of sleep is referred to as REM sleep, characterized by faster and more irregular brain waves. In contrast to SWS, muscles are more relaxed during REM, but the mind is more active, and the eyes dart rapidly beneath the eyelids during this period. Your dog can whine, breathe fast, and wiggle his legs during this period of increased brain activity.

Humans and dogs both go through the stages of the sleep cycle at the same time. We already know that humans dream. Because the sleeping brains of dogs and humans go through comparable stages of electrical activity, it is reasonable to believe that dogs dream as well.

Scientific study has demonstrated that brain wave patterns in humans and dogs are nearly identical, validating this idea. The conclusion is that dreams are a natural part of the sleep cycle, and dogs do have them.

What Do We Know About the Dreams That Dogs Have

Although dogs do not awaken and narrate their dreams, scientists have collected canine dreams and sleep patterns through clinical observations. Among their findings are the following:

During rapid eye movement (REM), the sleeping brain functions like that of an awake brain. Dogs dream about events during their waking hours, which is valid for both. Information received during the day is processed at night, and dreams may contain recollections of the day’s events. The pons, on the other hand, is a safety feature that is included.

How Often Do Dogs Dream

There are differences in the number of dreams experienced by different dogs, and the frequency and duration of dreams vary depending on the age and size of the dog. Puppies, for example, have more dreams than adult dogs because their minds are still young and innocent. Daily, puppies take in a large amount of new information, which they must assimilate at night.

Compared to their larger canine counterparts, smaller dogs appear to have more dreams. The length and frequency of dreams may be related to the animal’s size. According to the American Kennel Club, toy Poodles may dream every 10 minutes, but Labrador Retrievers may only dream once every 60-90 minutes.

The dreams of the poodle, on the other hand, may last a minute barely, and the dreams of the Labrador may endure 5-10 minutes. The frequency and the length of dreams are also related to the amount of sleep that is necessary. In the case of a giant dog who has had an active day outside, he may sleep more soundly and have longer phases of REM sleep, which will provide him more time to dream at night.

Does the Breed of a Dog Have an Impact on Dreams

There is a wide range in how frequently people dream and what they dream about, and studies believe this is also true for dogs. This has been discovered that little dogs have more frequent dreams than large dogs but that the duration of those small dog dreams is significantly shorter. Large dogs have fewer dreams, but they are much longer in the period.

We can also make an educated assumption that what your dog does throughout the day influences his dreams. Although we cannot be sure at this time, Pointers point and Dobermans exhibit guard behavior suggests that breed-specific behaviors may also occur during dreams. Your Labrador Retriever, for example, is more likely than a Pug to have dreams about chasing tennis balls in their sleep.

Do Dogs Have Bad Dreams

An anxious dog may be dreaming about something they don’t enjoy, or perhaps something that makes them feel uncomfortable or painful. Even though it can vary depending on the dog, most dogs do not enjoy going to the veterinarian, getting a bath, or going to the groomer. Additionally, if your pup is a rescue, he may still have flashbacks about his life before he was rescued, even though he is now in a safe and secure environment.

When their dogs whine or squirm about, some owners find themselves jolted out of their dreams. While it may be unsettling to watch or hear your dog whimpering in his sleep or racing in place, do not let your guard down.

It is frustrating to have your sleep interrupted, but there is no need to be concerned about your dog’s nightly activities because the majority of dreams are not terrifying nightmares. Having dreams is a natural and healthy phenomenon that occurs as part of the body’s usual 24-hour awake and sleep cycle.

It is crucial to remember that dogs and humans require uninterrupted sleep to maintain good mental and physical health. Provide your dog with a quiet, comfortable resting spot and do not disturb them while doing so. Approximately 60% of all dog bites in children occur when the youngster’s presence rouses a sleeping dog. It is critical to teach children not to disturb a sleeping dog when he is in his crate.

What Can You Do to Help Prevent Nightmares

There is nothing you can do when your dog is in the middle of a nightmare, but there are things you can do to assist prevent nightmares from occurring in the first place. Dogs will frequently experience nightmares about things that give them stress or discomfort. Making it easier for the dog to overcome his concerns might benefit him during his waking hours and sleep.

Techniques like desensitization and classical counter-conditioning can be used to assist your dog in dealing with this situation. Desensitization is just a slang term for the process of gradually exposing a person to a stimulus that causes them to behave in an undesirable manner.

A training phrase that refers to the process of altering your dog’s emotional response to specific stimuli, classical counter conditioning is defined as follows:

It is the matching of a stimulus that would ordinarily produce an undesired behavior or give your dog stress with one of your dog’s favorite rewards, whether it is a treat, toy, or head scratches, that is known as clicker training.

Because of this, you can combine your desensitization to nail trimmer sessions with your dog’s favorite snack. If you are having difficulty with these tactics at home or unsure of where to begin, your veterinarian or a positive reinforcement-based dog trainer can assist you and your dog.

Should you Wake up a Dog Who is Dreaming

The common belief is that it is not good to wake up a dog dreaming–even if the dream is a nightmare–because the dog will become agitated.

Dogs and humans have very similar sleep cycles. Therefore, during their REM sleep period, individuals obtain the greatest rest possible. Intermittent deep sleep is characterized by fast eye movement and brain activity and is distinguished from other types of sleep because it occurs in intervals. It also happens to be the time of day when your dog spends most of his time dreaming.

When you wake up your dog in the middle of a dream, you rob them of vital REM sleep. It can disturb their general sleep pattern, which could negatively affect the dog’s health and well-being.

Aside from interfering with your dog’s REM slumber, rousing them up poses a potential safety hazard. Being jolted out of a dream state and thrust back into reality can create severe disorientation and confusion. When your dog wakes up for the first time, it could take several seconds for them to grasp what has happened, and it is impossible to predict how they will react.

Once awakened from a particularly vivid dream, even the friendliest and most well-behaved dog can react violently, and this can include biting and biting.

If you find yourself having to wake your dog from a particularly terrible nightmare, there is a specific procedure you should follow, which is detailed below.

Labradoodle Aggressive Behavior: How To Stop It

How To Help Your Labradoodle Live Longer With...

Why Do Dogs Lick Themselves?